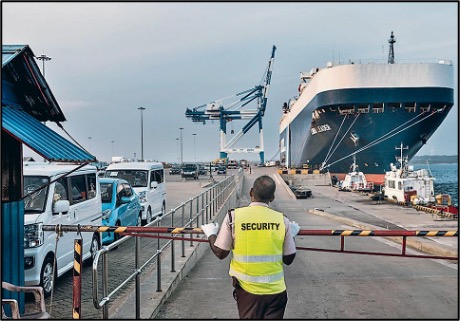 The economic crisis currently impacting Sri Lanka is sad to witness but has been brewing for some time. The port of Colombo, strategically positioned between the southern tip of India and the northern entrance to the Straits of Malacca was until recently a relatively stable trading hub, bustling with activity, for vessels trading back and forth between Europe and the Far East. Anyone who has visited will attest to the fact that Ceylon as it was previously known was about as close to a prosperous tropical paradise as you could get – anyone else remember swimming in the pool at the historic Mount Lavinia Hotel? Following the granting of a bloody independence to India in 1947, Ceylon followed in 1948 which in stark contrast was an entirely peaceful transition. Not until 1972 was the name Sri Lanka adopted as the country sought to shake off its colonial legacy.

The civil war involving the Sinhalese controlled central government against the Tamil minority in the north of the country stretched from 1983-2009 and tore the country apart. Guesstimates are that 100,000 people died but in truth nobody knows. However, one thing for sure is that the final few months witnessed all manner of atrocities against the Tamils which are unlikely ever to be forgiven.

Government intervention in the economy combined with rampant corruption, initially fairly benign but in recent years full throttle, has not served the Sri Lanka well. The country wandered into debt trap diplomacy set by China and now finds itself unable to meet the maturity dates of International Sovereign Bonds amounting to over $8 billion in projects including roads and the new Hambantota Port adjacent to Colombo. Financed by Chinese entities in support of that country’s Belt and Road Initiative, initial port construction began in 2008 but the project suffered significant construction cost over-runs and operating losses. The dire financial situation resulted in an agreement in 2017 for China to take a 70% stake in Hambantota Port through state owned China Merchants.

Sri Lankan debt repayment has been further compromised in the past couple of years by the collapse of tourism related to the impact of COVID. In fact, the government has conveniently deflected blame for the entire financial collapse to the lack of visitors but the population does not seem to be buying it. Desperate for cash, the country has even negotiated barter payments such as paying Iran for oil imports with shipments of tea.

Sri Lanka is not alone in finding itself financially beholden to China. Pakistan is similarly compromised, and the East African country of Djibouti is said to be in debt to China in excess of 70% of GDP. In fact, pretty much all Belt and Road inspired infrastructure development in Djibouti is financed by Chinese banks and China was the contrived beneficiary when in 2019 the Government of Djibouti terminated a container terminal concession held by DP World in favour of a new agreement with China Merchants. DP World filed suit at the High Court of England and Wales in London and won an injunction which Djibouti continues to disregard. As an aside, Djibouti is also now home to China’s first overseas naval base.

Seemingly oblivious to the dangers, construction of Cambodia’s third major deep-water port at the southern city of Kompot near the Vietnamese border is also underway. The project is budgeted to cost $1.5 billion and is another example of port infrastructure being financed by China. The Shanghai Construction Company and the China Bridge and Road Company are participants in the project which is expected to complete by 2025.

The debt crisis in Greece and forced sale of assets in return for EU loans has resulted in even more opportunism. China Ocean Shipping Company (COSCO) has taken a 67% share in the Port of Piraeus Container Terminal which it has developed into a substantial Belt and Road hub. It should be mentioned that COSCO also holds container terminal interests in Seattle, Singapore, South Korea, Suez, Abu Dhabi, Spain, Belgium, Holland, Peru and Seattle.

More recently, opposition from the U.S. and Australia has failed to dissuade the government of the Solomon Islands from signing a confidential “framework agreement” on security issues with China. However, leaked details appear to indicate that China will undertake naval port visits and logistical replenishment along with unspecified security support.

So, what are the lessons? It should be no surprise that China seeks to expand the country’s economic influence through long term strategic investment overseas. However, the willingness of developing countries to be lured into short term prosperity financed by state owned Chinese banks is a debt trap from which they may never recover. Painful solutions may also ultimately compromise national sovereignty, as is happening today in Sri Lanka since the government has lost control and is beholden to the willingness of China to refinance sovereign debt.

As the world has learned with Russia, choose your partners carefully.