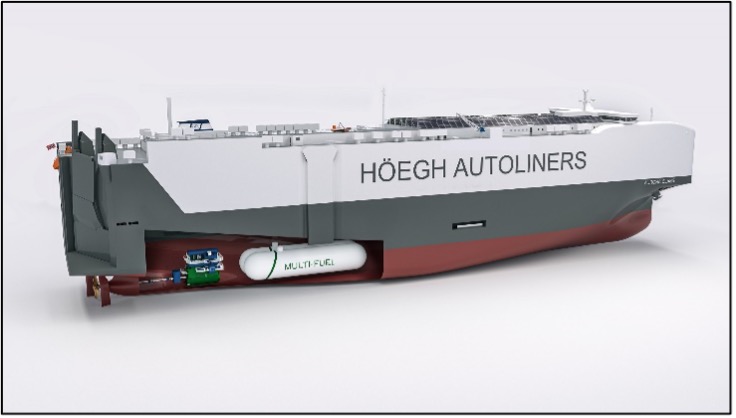 The world’s first ammonia fuel-ready vessel, the Suezmax tanker Kriti Future was delivered earlier this month to her Greek owners Avin International. Although conventionally fueled, for the time being, the vessel complies with the ABS Ammonia Ready Level 1 requirements, indicating it is designed to be converted to run on ammonia when the time is right.

Those who follow shipping trends may be aware that Norway’s Höegh Autoliners announced in April 2021 the signing of a Letter of Intent with China Merchants Heavy Industry (Jiangsu) to build a series of up to 12 multi-fuel and ammonia ready “Aurora Class” vessels. Under the terms of the agreement, the first two vessels, each designed to carry up to 9,100 cars will be delivered in the second half of 2024. The vessels will be the largest and most environmentally friendly car carriers yet to be built. They will receive a formal ammonia ready notation from DNV, the classification society having launched its industry-first “fuel-ready” notation to coincide with the ordering of the new vessels. DNV is anticipating that there will be demonstration projects for onboard use of ammonia by 2025, paving the way for zero-carbon ships in commercial use by 2030.

The delivery of Kriti Future and the investment by Höegh are significant milestones within the wider debate as to what will emerge as the preferred marine fuel option. Hydrogen power and green methanol are the favored alternatives so far, however staying with ammonia, things seem to be moving along quickly with DNV having also been selected to partner with the Singapore Maritime Academy in leading an ammonia bunkering safety study by the locally based Global Centre for Maritime Decarbonisation (GCMD). This is noteworthy as 10 years ago Singapore MPA was the initial success story in the development of LNG bunkering capacity and standards but seemingly has no intention of being left behind in the race to prepare for next-generation fuels.

While owners everywhere are focused on the next propulsion revolution, a number of statistics are coming in for 2021. Around 700 vessels were scrapped, almost 60% of which were tankers and it is interesting to see the correlation between trading conditions and those vessels which reached end of life.

The bumper year in the container and bulk trades resulted in a scramble for ships in those sectors which was just the opposite to the situation for tankers which had a miserable year. On the concerning side, the approximate $190 billion in profits generated by the container carriers, despite an unprecedented level of port congestion and related delays, has resulted in the ordering of over 500 new vessels, a 400% increase over 2020 and equivalent to around 25% of existing container capacity. In fact, the number of container vessels ordered in 2021 exceeded the orders placed for 2017-20 combined. About one-third of new container ship orders involved LNG or LNG hybrid fuel systems and we are beginning to see orders for container ships having an ammonia conversion option.

In the tanker sector, 301 vessels were sent for razor blades in 2021 compared to only 88 in 2020 as, with APEC and friends maintaining a tight reign on supply, owners declined to continue trading older assets at loss-making rates.

While the 2021 spike in the Baltic Dry Index could not be maintained, it was nevertheless the best year in a very long time for that long-suffering sector. Amazingly, less than 60 vessels were scrapped, or around only 10% of the total. Also unsurprisingly, only 11 container vessels were scrapped in 2021 compared to 59 in 2020. Let’s hope that the huge order book does not propel the sector to another decade of despair.