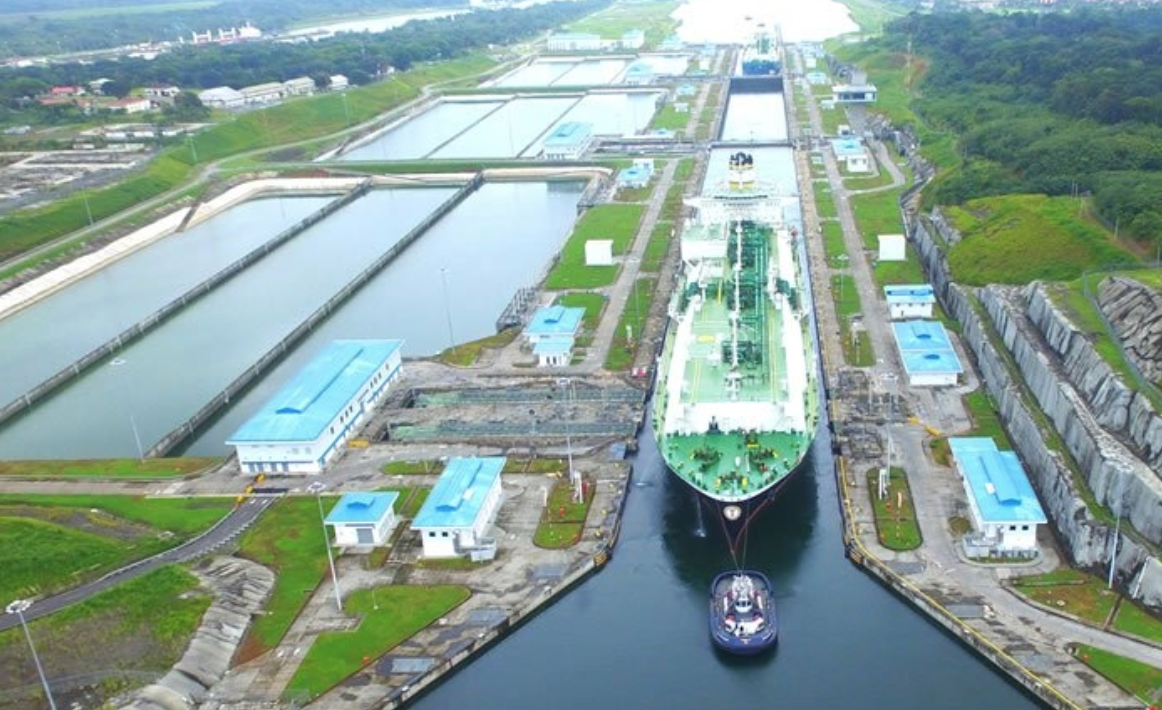 The continued unwarranted detention of the Ultra large Container Vessel Ever Given by the Suez Canal Authority (SCA) has thrown a spotlight on the relationship between the marine industry and the management of critical infrastructure across the globe.

Since opening for business, the Suez Canal in 1869 and the Panama Canal in 1914, these vital trade links, essential to their respective national economies have been mired in politics. The sudden nationalization of the Suez Canal by Egypt in 1956 and the subsequently aborted Anglo-French military operation to retake it resulted in the fall of the British government of the day. The closure of Suez from 1967 to 1975 following the 6 day war between Israel and her neighbours was initially a frustration to world trade, not least to the 14 ships stuck in the Great Bitter Lake for the duration. However, adjustments were made, South Africa stepped up to service vessels re-routed between Asia/Australia and Europe via the Cape of Good Hope and the industry itself invested in new classes of larger vessels including the first supertankers and the early classes of pure container ships.

Other than progressively managing larger vessels through dredging and widening, not a great deal changed for the Suez Canal until the opening of a new 35 km twin lane centre section of the Canal in 2016 at a cost of $4.2 billion. That said, the Ever Given incident has highlighted the need for much greater investment by the SCA, in particular in the southern stretch where the vessel grounded. Following the incident, dredging will take place along a 30 km stretch, 40 metres to the east into the Sinai Peninsula to a depth of 22 metres, from the current 20 meters. The project is expected to be completed in 2023.

The short-term U.S. invasion of Panama in 1989 with the intention of removing the country’s leader, General Manuel Noriega, was justified on the grounds of maintaining good order in a country through which vital U.S. trade flows, but also on which military links between east and west coasts depend. Despite skepticism, the peaceful transfer of sovereignty of the Panama Canal Zone from the U.S. to Panama on Jan 1, 2000 was relatively seamless. Panamanian administrators and pilots were already well advanced in assuming control from their U.S. counterparts and the national referendum held in 2006 went on confirm the support of the population for an ambitious expansion of the Canal’s capacity. Despite construction delays and a budget over-run to $5.4 billion, the expanded Canal opened in 2015 and has exceeded traffic and revenue expectations with around half of transits being container ships along with an increasing number of LNG carriers as US LNG exports to Asia continue to expand.

Other strategic links include the 98 km Kiel Canal opened in 1895 linking the North Sea to the Baltic Sea. The Canal saves around 460 kilometres compared to the route around the frequently stormy Jutland Peninsula, but it too has been impacted by the occasional accidents and delays for maintenance to the aging infrastructure. The waterway was of huge strategic importance to the German military effort in the two world wars and in 1939 was predictably one of the first allied bombing targets. 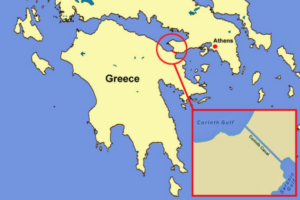 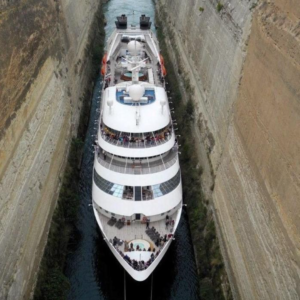 Although of limited strategic or economic importance, the most picturesque canal is arguably the Corinth Canal (map and picture above) opened in 1893, connecting the Gulf of Corinth in the Ionian Sea with the Saronic Gulf in the Aegean Sea. The Canal is 6.4 km long and only 21 metres wide at its base. Nevertheless, its attraction for small cruise ships provides guests with a unique experience.

The greatest marine infrastructure engineering achievement of the 20th century is arguably the St. Lawrence Seaway, jointly administered by the US and Canada and opened with great fanfare in 1959. The 600 km seaway comprises 15 locks and services some 40 million tonnes of cargo in the average navigable season.

A smaller example of a canal handling deep sea vessels that drove economic prosperity, specifically for the North West of the UK, is that of the 58 kilometres long Manchester Ship Canal opened in 1894. Like most such projects, this one was controversial having been driven by Manchester merchants unwilling to be held hostage to the port of Liverpool. In due course, Manchester became the UK’s 3rd busiest port and hosted a dedicated shipping line “Manchester Liners” which traded primarily to Eastern Canada, the St. Lawrence Seaway and the Great Lakes but also to the U.S. Gulf and the Mediterranean. Traffic peaked in 1958 at around 20 million tonnes/year but today’s owners have ambitious plans to revive its fortunes by moving around 100,000 TEU per annum through the Canal by 2030.

When we consider maritime infrastructure, our minds inevitably wander to success of man made canals but also to the need for new ports along with much needed upgrading and modernization of existing ports to service larger vessels. Sadly, opposition to port development is a misguided phenomenon that the marine industry confronts daily and despite global dependence of maritime trade, you really have to wonder if any of these canals would ever have made it to the finish line in the current environment of NIMBYism and seemingly endless environmental reviews.