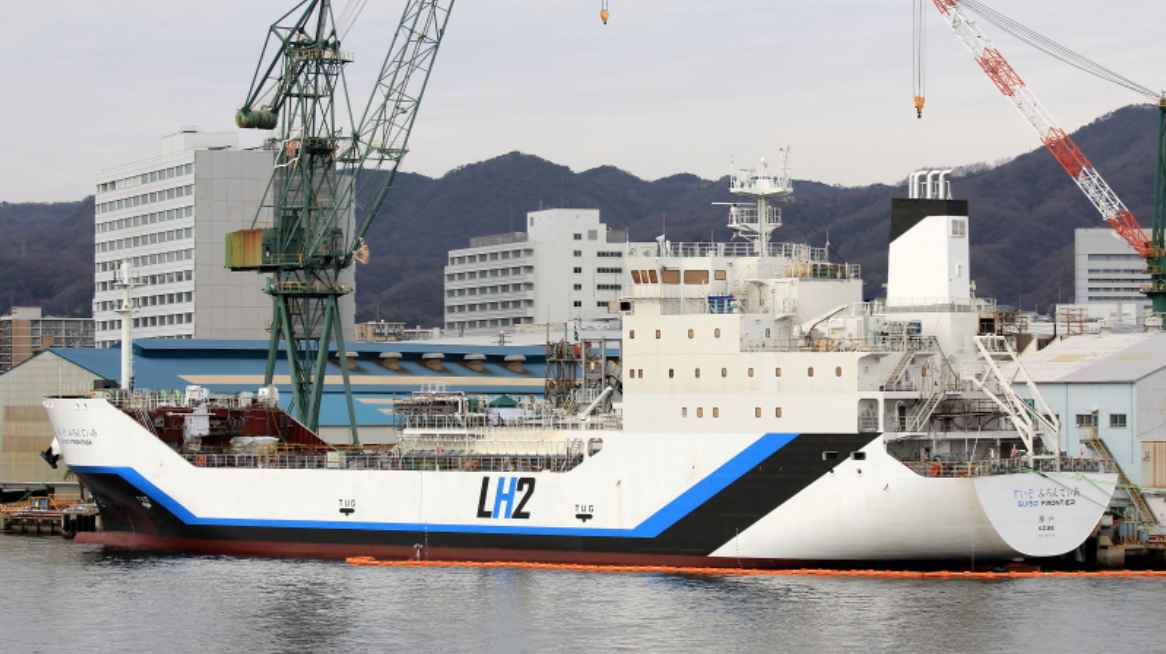 Currently under construction is the world’s first dedicated hydrogen tanker Suiso Frontier (Suiso translates to hydrogen in Japanese). The vessel is part of the HySTRA (CO2-free Hydrogen Energy Supply-Chain Technology Research Association) demonstration project, which will see cryogenically frozen hydrogen shipped from the port of Hastings in the state of Victoria, Australia, to the Japanese port of Kobe. The hydrogen will be extracted from brown coal.

The project will see low-calorie, moisture-rich brown coal “gasified” by mixing it with oxygen and steam under high pressures at a purpose-built facility in the Latrobe Valley, Victoria state. The process creates a synthetic gas consisting mainly of carbon monoxide (CO) and hydrogen. The two compounds in this “syngas” are then separated by a membrane, with the hydrogen captured and stored and the CO released into the air where it naturally combines with oxygen atoms to become carbon dioxide.

Hydrogen gas will then be shipped by truck to the nearby port of Hastings, where it will be liquefied and loaded into a 1,250 cbm vacuum insulated, double shell structure liquid hydrogen tank installed on the Suiso Frontier for shipment to a newly built receiving facility in Kobe. The cargo will be carried at temperatures of minus 253°C with the liquefaction process reducing the volume of hydrogen gas by a factor of 800.

The potential for Hydrogen as a clean-burning gas that can be used for energy storage, heat, transportation and industrial processes is increasingly being seen as having a major role in the decarbonisation of the energy sector. To be considered a clean fuel, the hydrogen itself must be produced via electrolysis (splitting water molecules into hydrogen and oxygen with an electric current) using renewable energy thereby creating so-called “green hydrogen”. Alternatively, hydrogen can be sourced from fossil fuels with the CO2 captured and stored thereby creating so-called “blue hydrogen”. Having little in the way of natural resources, Japan is well advanced in planning for a “hydrogen economy”. 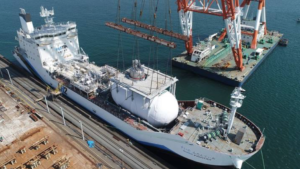 In addition to support from the Australian and Japanese governments, the US$391 million project is being driven by a consortium formed in 2018 involving Royal Dutch Shell, Kawasaki, Iwatani, J-Power, Marubeni Corp. and AGL Yang Pty. Ltd. In 1981, Kawasaki was also the first Japanese company to build an LNG carrier.

The maiden voyage of Suiso Frontier is delayed until the early summer of 2021 on account of COVID related delays at the shipyard. Global demand for hydrogen is forecast to grow by a factor of more than 50 to around $3.75 billion in 2030, according to an estimate from market research firm Fuji Keizai.

West Pacific Marine’s team of experts offers marine consultancy services, aiming to empower you with reliable information and the development of a strategy that meets your unique project needs. Get in touch to learn more and schedule a meeting.