With an open deck measuring 275m x 70m, the uniquely designed Boka Vanguard is the world’s largest semi-submersible heavy lift vessel and since first commissioning has been extensively used to move large and heavy offshore oil and gas structures around the world. 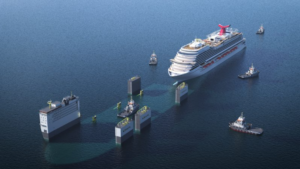 As can be seen from the video, Boka Vanguard features a bow-less design with the crew accommodation, including the lifeboats, on the starboard side of the vessel. The design allows water to flow along the entire deck but prevents flow into the enclosures of the vessel. Engine exhausts are based on towers at the port and starboard quarters.

The 4,000 guest capacity Carnival Visa was built by Fincantieri, Monfalcone, Italy and entered service in 2016. She is fitted with two ABB Azipod units and has a service speed of 18 knots 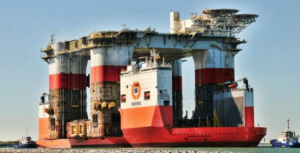 Back to routine business – carrying a drill platform