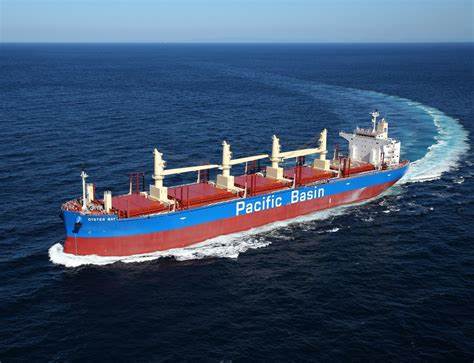 Owned and operated by Pacific Basin Shipping of Hong Kong, Oyster Bay is representative of a fleet of 120 Supramax bulk carriers both owned and operated by the company. The Supramax segment is generally accepted to be vessels in the range of 52-58,000 tonnes deadweight.

Built by Oshima Shipyard, Japan in 2016

Initially founded in 1987, Pacific Basin Shipping was sold in 1996 before being reconstituted by the founding partners in 1998 and listed on the Hong Kong Stock Exchange in 2004. The company has since progressively expanded to be represented by 13 regional offices spread over 6 continents thereby reflecting the truly global nature of the core business spread over 550 customers worldwide.

The trading fleet consists of nearly 250 ships, evenly split between the Handysize and Supramax sectors. In terms of outright ownership, the current numbers are 75 Handysize and 42 Supramax ships with an average age of 10.5 years. The remaining ships are chartered in either long or short term to meet market demand. In 2021 the company carried 79 million tonnes across the globe.

Pacific Basin has been recognized through many international awards for quality of service and in 2020 joined the Getting to Zero Coalition having the objective of rolling out zero emission commercially viable vessels by 2030. In May 2022, the company signed a Memorandum of Understanding with Nihon Shipyard Co., Ltd and Mitsui & Co., Ltd to cooperate in the investigation and development of zero-emission vessels (ZEV) and investment in related bunkering infrastructure.

Founded in 1973 and specializing in the construction of bulk carriers to standard designs, Oshima Shipyard is a joint venture between Sumitomo Corp. and Sumitomo Heavy Industries.