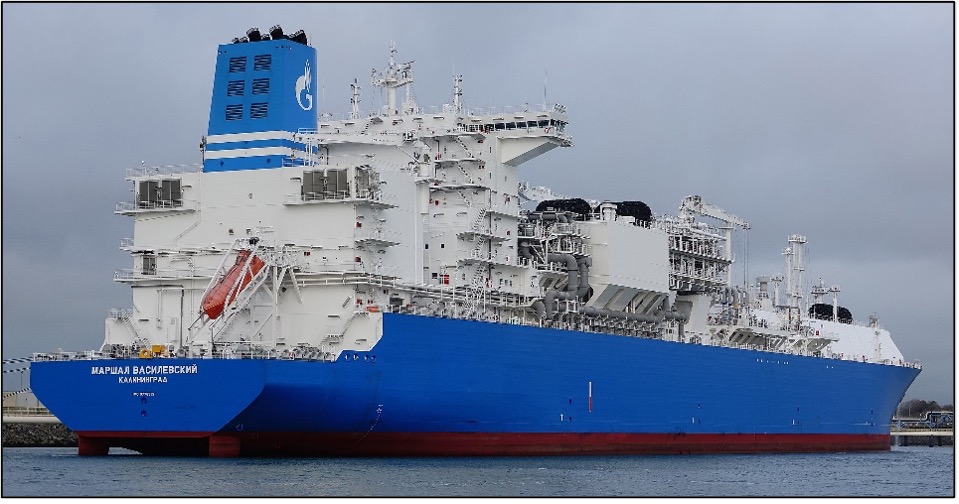 Marshal Vasilevskiy is Russia’s only Floating Storage Regasification Unit (FRSU), a prime example of these complex vessels which have the attractive option of providing in port terminal LNG capacity or trading on the open market. She was originally built to serve Kalingrad.

The vessel suffered an explosion in one of her six regasification boilers during sea trials off Ulsan in May 2018. The boiler was destroyed which along with other damage sustained resulted in her significantly delayed delivery from the yard. Following delivery, she was chartered to OMV an Austrian multinational integrated oil, gas and petrochemical company who positioned her in Rotterdam as a temporary offshore storage facility

Compounded by international tensions, high gas prices have been a constant theme this winter. Europe relies on Russia for around 35% of its natural gas supply which has been tight for some time. A cold winter in 2021, followed by heatwaves, strong demand from Asia and droughts impacting hydroelectric output have all combined to increase demand for gas. Added to this, the Hammerfest plant in Norway has been out of service since September 2020.

Marshall Vasilevskiy (1895-1977) began his military career in World War I and by 1943 was a Marshal of the Soviet Union. As such, he was at the hear of the Soviet military command throughout World War II and became one of that country’s most decorated leaders.