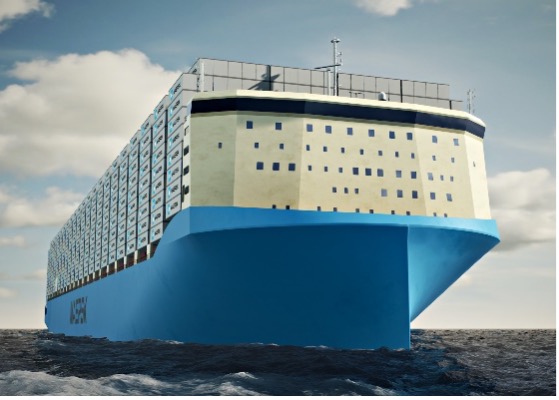 Container vessel appearance is about to enter a new phase with the announcement by Maersk Line of the design for a series of eight carbon-neutral methanol-powered 16,000 TEU capacity container ships ordered with Hyundai Heavy Industries (HHI). The first vessel in the series is scheduled for delivery in Q1 of 2024. A contractual option for four additional vessels was also exercised earlier this month.

New for Ultra-large Container Ships (ULCS) is the decision to follow established cruise ship design with the bridge and crew accommodation block pushed forward. Meanwhile, a single funnel is located on the port side of the stern thereby maximizing capacity and providing uninterrupted access to cargo in the port.

Fuel tank capacity: 16,000 cbm – intended to be sufficient for a round trip Asia to Europe running on green methanol without interim bunkering

Maersk has skipped the dual fuel diesel/LNG option favored by several competitors and jumped directly into renewable methanol, sometimes referred to as green or e-methanol, an ultra-low carbon chemical produced from sustainable biomass (bio-methanol) or captured carbon dioxide and hydrogen produced from renewable electricity. Maersk estimates that the new vessels will achieve 20% improved Energy Efficiency per transported container compared to the industry average translating to saving around one million tons of CO2 emissions each year across the eight-ship series. In 2018 the company set an aggressive goal of becoming carbon neutral by 2050 including the development of a commercially viable net-zero C02 vessel by 2030.

The need to scale up fuel supply by 2024 represents a significant challenge but who would bet against these vessels being a successful trendsetter?