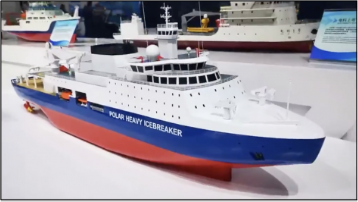 The first Chinese domestically built ice breaker, Xue Long 2 (Snow Dragon 2) was delivered in 2019 and made her maiden voyage to Antarctica the same year. She is Polar Class 3 and therefore capable of breaking 1.5m thick ice in polar areas. An earlier ice breaker was purchased from Ukraine and modified to China’s requirements.

In a policy note issued in November 2021, China announced plans to complete the technical design of a new heavy icebreaker along with supporting heavy-lift Arctic rescue capacity within 3-5 years. A conceptual model of the new heavy ice breaker provided by China is the lead picture to this article.

China’s latest five-year development plan released last year, calls specifically for enhanced polar exploration through the use of specialized and standardized vessels including capable icebreakers and heavy lift vessels in support of developing a Polar Silk Road, a concept first announced in 2018. Having gained permanent observer status on the Arctic Council in 2013, China now formally classifies itself as a Near Arctic State in support of its strategic and economic interests.

Meanwhile, Russia continues to promote the Northern Sea Route which in 2021 handled a little over 33 million tonnes of traffic including 2 million tonnes of transit cargo, a growth of 60% over 2020. LNG and oil exports underpin the numbers but there are also substantial volumes of iron ore and concentrates. The trade is supported by a purpose-built fleet including nuclear-powered ice breakers of the Arktika class. China is already a significant investor in the Russian Arctic economy with the Northern Sea Route set to continue its expansion into a global shipping route (and Polar Silk Road) for cargoes flowing from Asia to Europe, and vice versa.

For their part, Canada and the U.S. are lagging badly behind with both countries operating obsolete Arctic tonnage. Canada’s single Arctic heavy ice breaker Louis S. St-Laurent is now 53 years old and has been upgraded several times at enormous expense while awaiting a decision on her replacement. Incredibly, she is being asked to continue until at least 2030 when the first of two new Polar Class ice breakers is expected to enter service. It was announced in 2008 that a new Polar class ice breaker John G. Diefenbaker would be built at the Seaspan Yard in North Vancouver but for complex reasons, this has not happened. Following intense lobbying for the contract from Quebec, it was finally announced in May 2021 that a decision has been taken to build two sister vessels, one at Seaspan the other at Davie Shipbuilding in Quebec.

In December 2021, Canada’s Parliamentary Budget Officer estimated the government’s plan could cost up to $7.25 billion inclusive of project management costs of $346 million, design costs of $820 million, and acquisition costs of $6.1 billion. It is worth noting that when the plan for one new icebreaker was first announced by the then Conservative government in 2008 the cost was estimated at $720 million. A further update provided in 2013 was put at $1.3 billion. Construction of the first ship is now presumed to get underway in the 2023-2024 fiscal year and construction of the second ship in 2024-2025. A sensitivity analysis suggests that delays of either one or two years in the start of the construction for both vessels at each shipyard would increase total project costs by $235 million or $472 million respectively. Delivery of the first vessel is expected in in the 2029-2030 fiscal year, with the second vessel expected in 2030-2031. 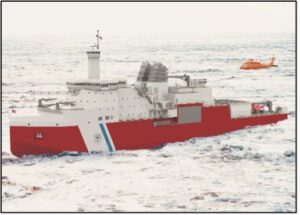 Similarly, the United States has a single active heavy icebreaker USCGC Polar Star. Following a decade of debate, in 2019 Congress authorized the construction of three new vessels at VT Halter Marine, Pascagoula, Mississippi. The first is scheduled for delivery in 2024 at a price tag of $746 million.

Climate models project nearly ice-free summer conditions by the mid-21st century thereby offering new options for international shipping. However, coupled to this is the need for new ports and infrastructure as the global competition for Arctic riches intensifies. The Port of Churchill in Hudson Bay is Canada’s only northern deep-water port, the current shipping season running from mid-July to the beginning of November.

China and Russia are clearly alert to the opportunities represented by the Arctic and have demonstrated a willingness to invest considerable resources to realize these, however, the Arctic journey is just beginning. Conflicts related to sovereignty, freedom of navigation, and access to economic opportunity will be reliant on more than polite exchanges and fine words at meetings of the Arctic Council – they require a credible physical presence which for some players is currently lacking.