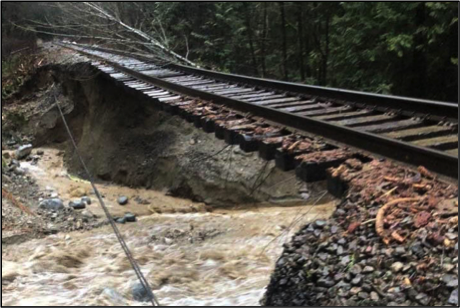 As 2021 draws to a close, we are left to reflect on a year which has seen British Columbia subjected to record breaking summer heat and autumn rainfall. The summer heat domes are concluded to have cost around 600 lives, mostly seniors living alone in inadequately ventilated homes plus the razing of the northern town of Lytton which was almost entirely burnt to the ground.

Meanwhile, the autumn rains have resulted in a financial cost still to be quantified, but certainly in the many billions of dollars following unprecedented road and rail infrastructure damage. Kilometres of road and track were washed away or hit by landslides leaving the City and Port of Vancouver cut off from the rest of the country. At the same time, the livelihoods of hundreds of farmers in the dairy, chicken and fruit crop industries have been wiped out. In the north, the City of Merritt has been almost entirely evacuated on account of flooding and hundreds of properties will never be reoccupied.

It is therefore perhaps ironic that just a month ago I was writing of the outcomes from the COP26 Climate Conference in Glasgow and of the importance for shipping to do its bit in mitigation of climate change. Aspirational as this may be, the events of the last month here in BC are a stark reminder that damage to our rail infrastructure, the worst since Canadian Pacific connected us to the rest of the country in 1886, places us on a path towards an uncertain future. CN & CP moves about 70% of the containers in and out of the Port of Vancouver but also the entirety of export bulk products in the coal, grain and potash sectors. Loss of rail service therefore quickly translated to the port coming to a standstill for the best part of two weeks other than for a handful of truck movements. An additional challenge was that every berth was occupied and 50-60 ships were anchored awaiting cargo and/or berth availability.

Events such as this serve to underline long recognized supply chain fragility but equally the serious pre-existing infrastructure deficit. Growth in residential development to house a rapidly growing population along with growth in the movement of goods, the delivery of services and expansion of tourism has not seen nearly enough corresponding investments in supporting infrastructure. The result is congestion, pressure on quality of life and higher living costs. This is not a problem unique to BC, however it is compounded by challenges of political coordination, the spread of misinformation and inability to reach decisions, no matter how many environmental reviews an infrastructure project is subject to.

There are also a number of road and rail bridges across BC whose natural life ended long ago. They were constructed to the standard of the day and may have been seismically upgraded but they are past their sell by date. Many have long since been recommended for replacement, but decisions deferred. If these were ships, Port State Control would have had their way with them decades ago. There is much talk now of “building back better”. What this turns out to mean is so far undefined, but we must hope that a recurrence of damage on this scale is preventable.

On the positive side, you have to marvel at how quickly the railways were able to resume service, cautious at first but gaining momentum. Likewise, the Trans Mountain pipeline on which the Lower Mainland depends heavily for fuel was restarted after a couple of weeks and progress in repairing roads has been remarkable. Roads which were initially looking to be out of action for months now looks likely to be a least partially open in a few weeks, despite the current difficult winter conditions.

Casting an eye around the world, no country seems to be escaping the impacts of climate change. As temperature rise across the Middle East, some countries in the region are now wondering how long they will be capable of supporting human life even as they strive to diversify their economies away from dependence on the export of fossil fuels.

The impacts for shipping are serious. It seems that supply chain disruption, just like summer wildfires, autumnal hurricanes and the always predictable Indian monsoon season is becoming the new norm. For sure, many lessons will be learned from this episode, however time passes by and complacency quickly replaces concern. Hopefully we are better prepared next time.

Season’s greetings to my readers and hoping for less drama in 2022.