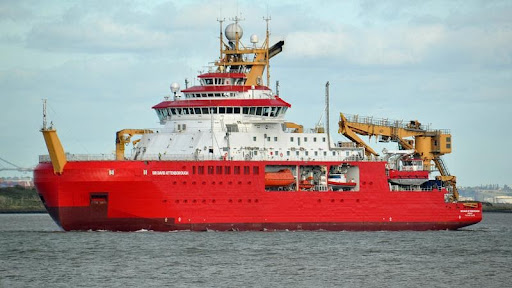 With her sea trials complete, in late October the UK’s new Polar Research ship, RRS Sir David Attenborough, paid a visit to the port of London ahead of her first deployment to the Antarctic this month. She tied up in Greenwich at the home of the Prime Meridian (Zero Longitude) to mark the beginning of the COP26 Climate Conference in Glasgow. Named after renowned UK broadcaster, naturalist, and environmental campaigner Sir David Attenborough, she is pictured above in the River Thames while on passage to Greenwich.

Crew: 28 plus provision for up to 60 scientists 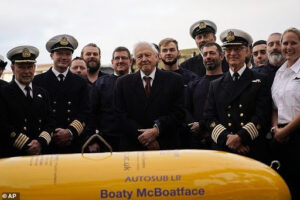 Sir David Attenborough, now aged 95, is pictured above with the crew of his namesake vessel looking over the remotely operated submarine named Marty McBoatface – a name initially tongue in cheek chosen for the ship from a UK poll but rejected by the Government. However, in the spirit of compromise, the name was granted to the submarine module.

In a short speech, Sir David commented that “he hoped world leaders meeting at COP26 would listen to the science and take action to curb global warming. I am indeed a very proud man to be standing in this remarkable vessel, to be associated in any way with best, the British Antarctic Survey. May I wish this ship and all who sail in her, and all the scientists who research on board, bon voyage on her forthcoming voyage to the Antarctic. I know that the findings made on this ship in the next few years will be of the greatest value and importance to the welfare of the world. Let us listen to the science.”