Along with her escort group, HMS Queen Elizabeth is this month leaving UK waters for her maiden overseas deployment. Following exercises in the Mediterranean with the French aircraft carrier Charles De Gaulle, she will transit the Suez Canal with visits and exercises planned to include 40 countries including India, Malaysia, Singapore, South Korea, Japan, Australia and New Zealand. She will also engage in freedom of navigation exercises in the South China Sea. 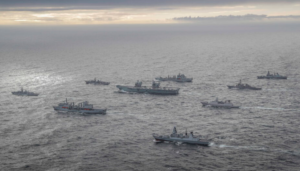 During the 28-week deployment, ships from the group will engage in more than 70 engagements, including an exercise marking the 50th anniversary of the Five Power Defence Arrangements with Malaysia, Singapore, Australia and New Zealand.

Sister ship HMS Prince of Wales is currently undertaking extensive sea trials and is expected to be ready for front-line service in 2023.

At West Pacific Marine, our marine consultancy in Vancouver aims at empowering you with reliable information and the development of a strategy to meet your unique project needs. Get in touch to learn more and schedule a meeting.