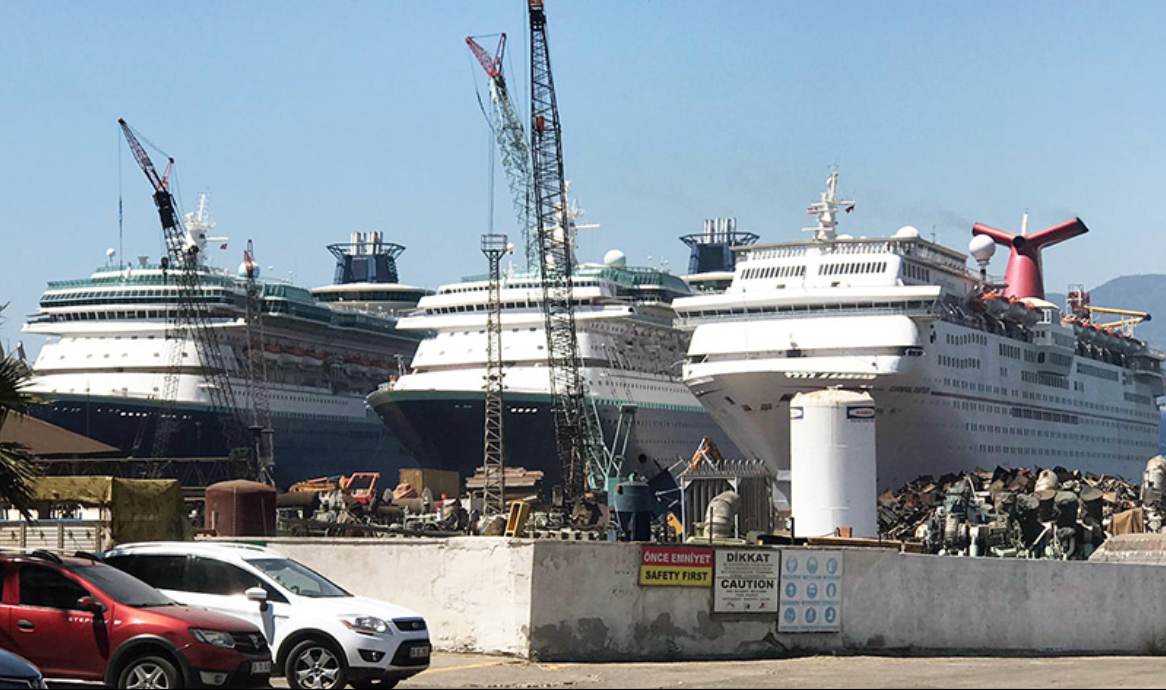 In normal times. the rate at which differing sectors of the shipping industry elects to sell or scrap ships is largely determined by freight markets or regulatory design and environmental changes and whether it makes economic sense to continue trading an aging vessel. In the COVID era we are seeing a new dimension in the decision of some cruise lines to sell or scrap ships which would normally have been expected to trade for several more years.

The lead picture to this article shows the vessels Monarch (ex Monarch of the Seas), Sovereign (ex Sovereign of the Seas) and Carnival Fantasy beached in Aliaga, Turkey, in late July 2020 for recycling. More cruise ships seem likely to suffer the same premature fate as their owners struggle to survive with zero revenues and recognition that it will take quite a while for the industry to get back on its feet.

The Hong Kong International Convention for the safe and environmentally sound recycling of ships was adopted by the IMO in 2009. The convention places significant emphasis on safe and environmentally sustainable recycling of ships and requires 15 ratifications, representing 40% of the world merchant shipping by gross tonnage, and on average 3% of recycling tonnage for the previous 10 years. India, Bangladesh, Pakistan, Turkey and China are the world’s top five shipbreaking countries, accounting for more than 98% of global shipbreaking by gross tonnage. A breakthrough in eventual ratification of the convention occurred in November 2019 when India added its signature to that of France, Italy, the Netherlands, Saint Kitts and Nevis and Turkey.

For its part, in 2013 the European Union adopted a home-grown “Ship Recycling Regulation” which aims to reduce the negative impacts linked to the recycling of ships flying the flag of Member States of the Union. The Regulation lays down standards that ships and recycling facilities must meet to ensure that recycling takes place in an environmentally sound and safe manner. From 31 December 2018, large commercial seagoing vessels flying the flag of an EU Member State may be recycled only in those “safe and sound” ship recycling facilities included in the European List of approved ship recycling facilities. Under the EU Regulation, the beaching method is not allowed and requirements related to downstream toxic waste management and labour rights are comprehensively spelled out. In addition, EU approved recycling facilities are subject to independent third-party certification and auditing for compliance.

The serious intent of the EU was made clear in 2018 when a Rotterdam court found the Dutch reefer operator Seatrade and two of its Directors criminally liable for illegally selling vessels for demolition in India and Bangladesh in breach of the EU Waste Shipment Regulation. This was the first occasion for an EU shipowner to be held criminally liable for the illegal export of vessels for demolition to South Asian yards. Seatrade and its Directors were fined up to 750,000 Euros and the Directors were banned from working in the shipping industry for a year. The public prosecutor had also sought prison sentences but the court did not go that far. However, the case was a clear warning to the industry and reflects the political climate and level of resolve by European countries to enforce recycling standards. Both the UK and Norway have been similarly active is pursuing legal action against alleged errant shipowners.

Returning to the immediate issue, that of recycling prematurely retiring cruise ships, Carnival Corporation has signed agreements with Turkish shipbreakers to “responsibly dismantle and recycle” Carnival Fantasy (built in 1990) and Carnival Inspiration (built in 1996). Carnival leaned on the expertise of the Norwegian NGO Bellona Foundation and the Netherlands based Sea2Cradle B.V., both companies being internationally recognized for expertise in green ship recycling. 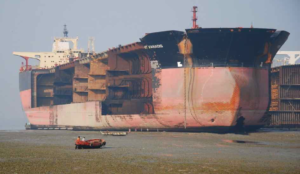 As shipowners continue to work through the practical and political sensitivities of ship disposals, the Ship Recycling Transparency Initiative (SRTI) online platform which describes itself as a collective effort to brings together the shipping industry, investors, cargo owners and broader stakeholders to improve ship recycling policy, practice and performance is gaining profile. Evergreen Marine Corporation has become the 11th shipowner to publicly disclose its approach to ship recycling through the SRTI which seeks to promote “an exchange of information on transparency in ship recycling practices and guidelines”. Evergreen is the fifth signatory to join the SRTI this year, bringing the total number of signatories to 26 including Maersk Line, CMA CGM, Hapag-Lloyd, Louise Dreyfus, Norden, Stolt Tankers, Swire Pacific Offshore, Teekay, China Navigation and Wallenius Wilhelmsen group. Maersk has gone even further with a financial investment in four yards operated by Shree Ram Industries in Alang, India. The investment extends to boots on the ground to oversee the entire process of recycling. That said, the company is clearly keeping other doors open and just recently sold the 22-year-old 9,640 TEU capacity Sine Maersk for demolition in Turkey.

Norway has meanwhile further underlined its commitment to the cause by providing approximately $1.5 million (NOK 14 million) to support improved ship recycling as part of an IMO sponsored project. The financing is in aid of the third phase of the Safe and Environmentally Sound Ship Recycling (SENSREC) project launched in Bangladesh in 2015 with a view to that country eventually being eligible to sign the Hong Kong Convention.

It should by now be fairly evident that retiring and recycling a ship is no longer a simple matter. The whole exercise is a minefield of regulatory and practical hurdles for an unsuspecting shipowner to run foul of, also having the potential for reputational damage.