In September 2019, Klaveness Combination Carriers took delivery of M.V. Barramundi from New Yangzi Shipyard in China. From a casual observation, this was not an exceptional event except that she is the third new build in a fleet of what will eventually be nine so-called “CLEANBU” combination carriers. That is to say, a series of high specification new builds capable of carrying wet or bulk cargoes. Deliveries are scheduled until 2021.

The Klaveness Combination Carriers business model is based on the development of dedicated trade patterns with consecutive switching between wet and dry cargoes and minimization of ballast legs between voyages. For example, wet and dry cargoes into Australia and South America switching to dry bulk cargoes on the return leg thereby achieving optimal vessel utilization allowing for competitive freight in both directions. It is also claimed that the fleet achieves up to 40% lower CO2 emissions per tonne mile compared to conventional vessels, a significant step towards the IMO’s target of a 50% reduction in CO2 emissions from global shipping by 2050.

Commercially, the history of trading combination carriers has been a chequered one for the shipping industry with a number of global charterers shying away from the advantages of the original Ore/Bulk/Ore (OBO) concept. There is also no denying that switching between wet and dry cargoes has had its operational challenges. However, the modern combination carrier is proving to be spectacularly successful as shipping comes under ever greater pressure to reduce its environmental footprint. 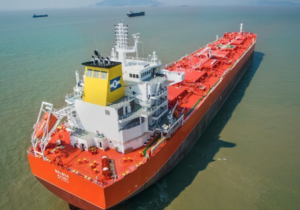 In addition to the company’s commitment to expand to a fleet of nine CLEANBUs combination carriers, there are options with New Yangzi Shipyard for additional orders. The CLEANBUs are 82,500 DWT and are both full fledged LR1 product tankers and Kamsarmax bulk carriers.

A family owned entity founded in 1946 by Mr. Torvald Klaveness, the company has its corporate head office in Oslo with branch offices in Shanghai, Singapore, Dubai and Manila. In addition to combination carriers the company owns a small fleet of handy size container vessels and is active in the Panamax and Handymax chartering market. The company also provides ship management services.