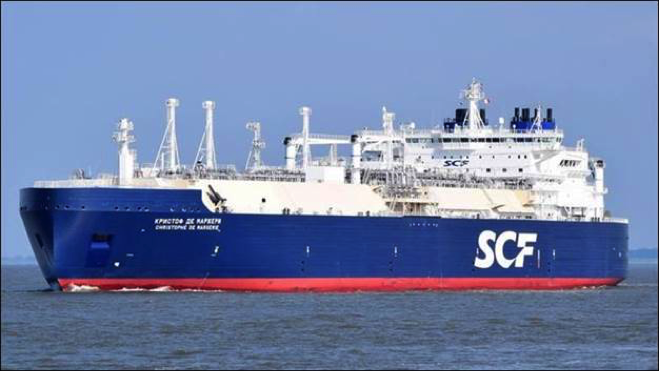 It seems that every summer, records are broken for transits of the Northern Sea Route (NSR) or the North West Passage (NWP). This year is no exception but the economic importance for the LNG trade is significant. In mid-August, the newly built ice-strengthened LNG carrier Christophe de Margerie completed the 2,193 nautical mile voyage from Norway to South Korea via the NSR at an average speed of 14 knots in 19 days which is some 30% less time than when taking the regular route via the Suez Canal. Passage of the NSR portion of the voyage was accomplished in just 6.5 days. 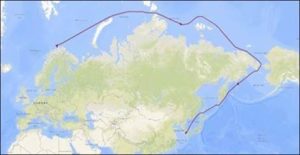 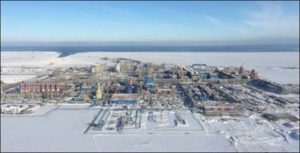 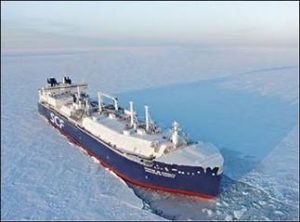 Christophe de Margerie is the first of 15 LNG carriers specifically designed and built for the SCF Group (Sovcomflot) to serve the Yamal LNG project (picture above right) and ship LNG year-round in the difficult ice conditions of the Kara Sea and Gulf of Ob. She is designed to sail independently through ice of up to 2.1 meters thick and is assigned an ice class Arc7, the highest ice class available for a merchant vessel. Notably she is fitted with a 45 MW propulsion system, which is comparable to the capacity of a modern nuclear-powered icebreaker and she is the first vessel of this nature to incorporate three Azipod units which provide her with a unique ice-breaking capability while maintaining exceptional maneuverability.

The Yamal LNG project was developed and is operated by Novatek, Russia’s largest independent natural gas producer, and the seventh largest publicly traded company globally by natural gas production volume. The Yamal plant is forecast to reach its annual production target of 16.5 million tonnes in 2018. 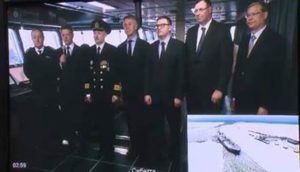 Above left,  Captain Sergey Zybko, Mr. Maksim Sokolov, the Russian Minister of Transport and Mr. Leonid Mikhelson, the owner of Novatek, speak with President Vladimir Putin from the vessel’s bridge via a video link. President Putin attended the naming ceremony at the Bronka deepwater port in St Petersburg in June this year. After initially abandoning the idea, Russia has recently re-announced plans to sell a stake in state owned Sovcomflot within this year. A sale would help to lift state revenues but could also assist in modernization of the corporate management culture after sanctions were imposed over the occupation of Crimea and the conflict in Ukraine in 2014.

Christophe de Margerie is named after the Chairman and CEO of the French oil corporation Total S.A. (picture above right) who died in a plane crash in Moscow’s Vnukovo airport in 2014. He was described by President Putin at the naming ceremony as “having possessed a unique strategic vision and did much to strengthen friendly, partnership relations with Russia, while being the driving force behind the implementation of a range of large joint energy projects. Naming the ship in his honour serves as another symbol of our sincere and kind disposition to this outstanding man, and as a commemoration of his memory.”

Ship of the Week